Gold Mine for Sale in Nova Mutum, Rondonia, Brazil

Gold Mine for Sale in Nova Mutum, Rondonia, Brazil 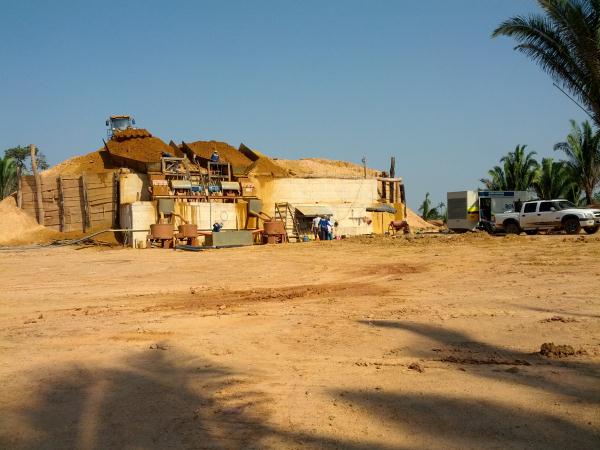 “The Gold Mine for Sale in Nova Mutum, Rondonia, Brazil is located near the town of Nova Mutum. It is located near Porto Velho on the BR-364.
The local geology is formed by sediments from the Cenozoic era, tertiary deposits covered and formed over the Quaternary colluvium-alluvial systems whose morphology is controlled by tectonic and climactic factors. Having a base of lithotypes of correlated Mesoproterozoíco, the trend of granitoídes rapakivi suites (Santo Antônio and Teotônio).

The local lithology is as follows: top layer presents itself with clay sediments and a presence of iateritic fragments of about 13 meters in depth passing into a silty clay followed by fine sand, ranging from medium to thick that deepens following change of rock sediments. Finally, there is a base of rock granite composite.

In the area searched, there were not mucurucú type sediment aggregates, associated with parts of Tertiary-Quaternary cover, where gold exists. However, we cannot rule out the possibility of locating it in the surrounding area. Holes F-01, F-02 and F-03.

Mechanical excavation was done in a central radius of approximately 7 and 9 meter depths, and then the material that was analyzed presented a layer of clay color varied with sandy clay passing to fine sand, then coarse sand, and ending with rocky material that is impenetrable by poll. These surveys were conducted with the aid of a PC machine where rolled blocks of granite rock of approximately 1.80 meters in diameter were found.

Result: Search results used the technique of concentrated debateia, where with the measured depth above, there were no results that may justify the exploitation of gold.

Hole F-04.
Hole performed outside the required area, located in a depression that was already excavated. Hole depth of 12 meters, giving mesamas characteristics of sediment deposits, terminating the hole in a thick sand without evidence of gold concentrations.

Following an alignment of a drainage network with an embedded micro-shaped valley. Next to these holes, in the past, there was mining activity. The holes show some evidence of gold panning potential, quite thin (laminar form) at a depth ranging from 16 to 18 meters. This would more precisely explain the holes 6 to 13.

Result: For search results, we used the technique of concentrated debateia, where with even the measured depth above, we obtained positive results with the sample. However, the estimated percentage per ton is 5 g / ton.
Hole F-07, F-08, F-09, F-10, F-11 and F-12.

Approximately 1,500 meters away from the farmhouse, NW following the dirt road leading outside the required area of study. Holes are near a creek, according to the map location of the holes in the picture. The average depth of the holes is 10 meters, due to the presence of gravel. We did not get results that justify the exploitation of gold.”